Surprising though it may seem, athletic spandex socks can pose the same difference as a rightly selected pair of shoes can.

Let’s try to understand this way;  an athlete running with blisters caused by wrongly selected socks, will he be able to perform his best?

We generally ignore socks without even contemplating how much difference they can make to our performance. However, it’s a common picture of the present time that Athletic spandex socks have infiltrated the running realms, and have become one of the essentials for athletes.

Moreover, there’s nothing more stressful than taking off your shoes around people and thinking if you will load the room with the stench from your sweaty socks.

Well, there is no reason to live with fear because the real culprit is poorly selected socks. 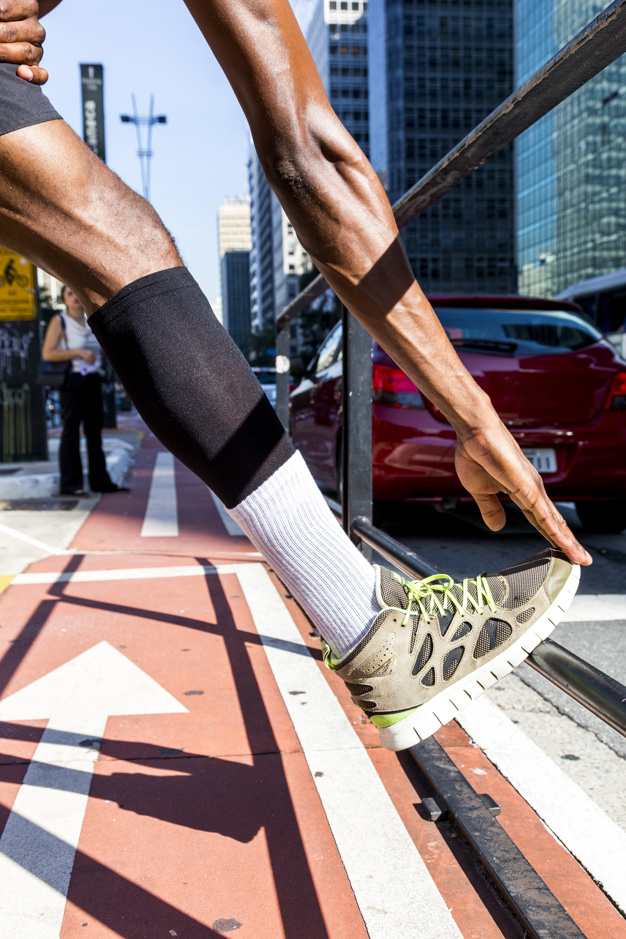 Wondering, how this choice could really impact the performance?

The athletic socks are made of fabrics such as hosiery yarn polyester, acrylic, which are perfect for long-duration workouts. When fabric like polyester is blended with spandex fabric it prevents moisture and fiction.

Inviya Spandex infused fabrics not just wicks away the moisture but also ensures absolute stretch and comfort to the socks.

Whereas Cotton socks retain moisture, consequently heat, and friction in sport’s shoes you are more likely to perceive blisters, calluses, and hot spots.

When spandex is infused with fabric it not only reduces movement but also wicks sweat and moisture away from the skin. Dry skin creates less friction which leads to less blister and comfortable movement.

When spandex fiber is blended with polyester yarn it ensures distinctive features of comfort, stretch, and durability to the socks.

High-quality athletic spandex socks prevent toenail problems and other serious foot issues that can compromise your performance. Inviya spandex for socks allows you to move freely and comfortably with improved performance.

The moisture-wicking property ensures that there is no extra sweat which leads to no bad odor even after a long duration workout. So next time you don’t have to get embarrassed for stinky sweaty socks.

Whether a long day of walking or a half marathon, athletic socks keep feet comfortable and socks dry and in place for the long haul.

However, choosing the athletic spandex socks, in the end, is a question of personal preference. Whether it is uncomfortable pressure points, blisters, or sweaty feet; without doubt, there are many problems the best athletic socks could solve

And owing to these unique properties Athletics spandex socks never fail to help you in improving performance.

Next time when you decide on sporty attire for your game don’t forget to select the right pair of socks, for a good performance game.

Spandex and neoprene have a link from historical times. The invention of spandex (Lycra) dates back to 1959 in Virginia. Neoprene is a form of synthetic rubber. We primarily use spandex for its stretchability. Before the invention of spandex,  industries used rubber to provide elasticity to the products. However, rubber was heavy and less adaptable. So, the origination of spandex took place through a project to find a synthetic alternative to rubber.

Here, the terms of comparison are spandex and neoprene. Neoprene is the synthetic form of rubber, invented in 1930. The fabric made from neoprene is called neoprene fabric, and it has uses in apparel, sporting, military, and other industrial products. Although neoprene also shows good elasticity and some other properties similar to spandex, the applications of both are quite different. Let’s take a look at a comparative study of spandex and neoprene over several parameters.

-Spandex: Spandex has exceptional elasticity. It can stretch to over 500% of its original size. It also regains its original shape speedily and does not lose its original state even after multiple uses.

-Neoprene: Neoprene also shows high elasticity. However, because it is a form of rubber, its recovering property starts fading after several uses. If stretched beyond a certain point, it does not pull back at all.

-Neoprene: Free radical polymerization of chloroprene produces spandex. It is a homopolymer.

-Spandex: Moisture-wicking ability of spandex is high. It takes up water particles and sweat and wicks the moisture throughout the garment.

-Neoprene: Neoprene has no moisture-wicking ability. It is a waterproof material.

-Spandex: Spandex is a highly breathable material. It allows the passage of air and moisture through it.

-Neoprene: Neoprene fabric is non-breathable. No air or water particles can pass through it.

-Spandex: Spandex is incapable of heat-retention.

-Neoprene: It has high heat-retention properties.

These points of difference indicate that neoprene and spandex are not the same. Apart from some similarities, both exhibit unique properties. That is why their application range differs.

For instance, spandex has a moisture-wicking ability, and it does not retain heat. Neoprene does not wick moisture but is insulative. This property allows the use of spandex in swimwear. Neoprene, for the same reason, has applications in waterproof products such as wetsuits.

Spandex has uses in the medical industry like gloves and bandages. Neoprene has applications in military equipment like gaskets.

Overall, spandex has applications in form-fitting garments like shapewear, stretch pants, skinny jeans, swimwear, and motion capture suits. Neoprene has applications in scuba gear, sportswear, electronic and industrial equipment. So, some of the products like sportswear fall under both neoprene and spandex. However, spandex is primarily known for its elasticity and neoprene for its waterproof and heat-retention properties.

We know that swimming is a competitive sport and a calming hobby. Swimwear should be comfortable as well as functional to retain the competitive and calming nature of swimming. It is rightly so because it is the quality of costume of any sport that largely influences the experience. For that rewarding experience, the choice of fabrics and their composition for the swimwear should be along the right lines.

The apparel industry uses a high percentage of nylon and polyester in swimwear. Nylon is a suitable choice for drag-suits and training-suits, and spandex suits well for competitive swimwear. However, swimwear, as a garment, should have negative ease and stretchability as a primary feature. The required stretchability is often not possible with just nylon or polyester. For that, nylon-spandex or polyester-spandex blends are ideal choices. The general composition is 80% nylon or polyester and 20% spandex. However, this composition may vary depending on the requirements of events or garments.